Double Commander is a cross platform open source file manager with two panels side by side. It is inspired by Total Commander and features some new ideas. It is written in Lazarus - some people think that pascal is a language for learning only. But on the other hand, it is possible to implement support for plugins from Total Commander easily, a little speed up development and give the user a choice of libraries to display the user interface (QT or GTK - are relevant only for Linux). 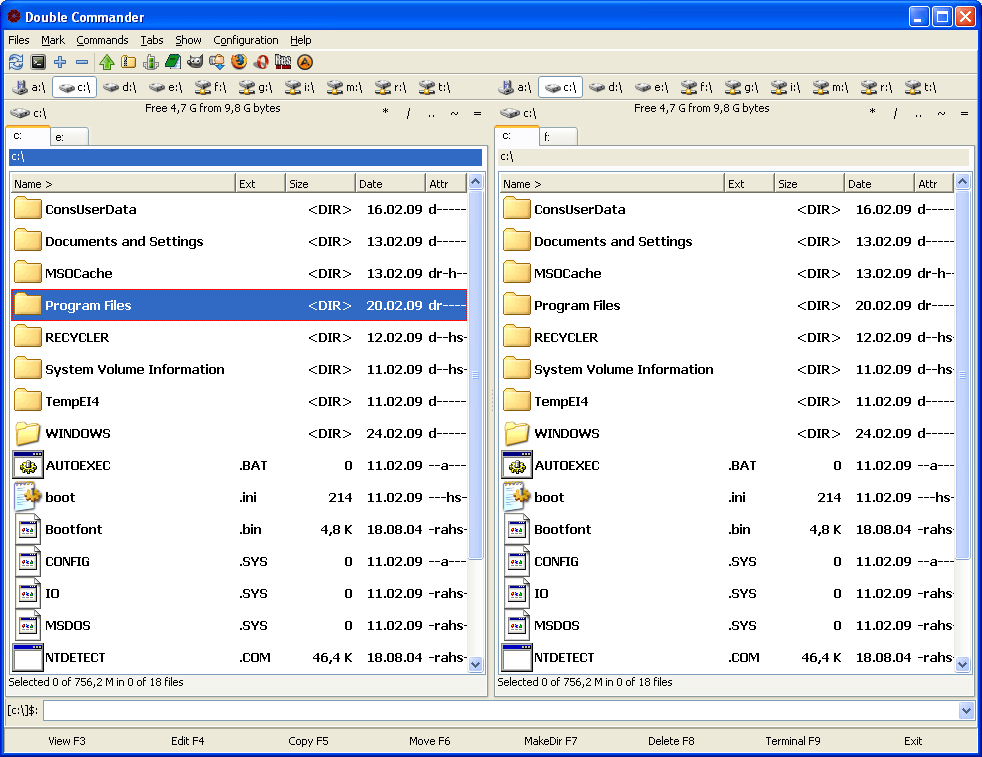 Let’s consider the upper part of Double Commander a little more in detail: 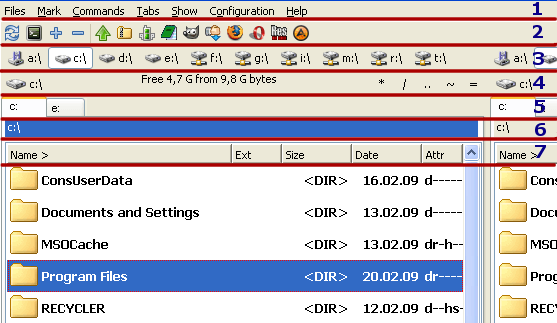 1 - the main menu. It is not used very often, but if something is missing - take it there.

2 - the toolbar. By default, there is quite a few buttons, the usefulness is questionable. In the screenshot the main used programs are placed: GIMP, a notepad, a browser, a player. Maybe it’s useful for someone. Personally, I have it all either on the desktop or in the Quick Launch toolbar. So it’s great that there is an opportunity to disable this toolbar.

3 - disk buttons. I have used them occasionally in Total Commander, but in Double Commander somehow immediately liked the selection button of the current drive in the 4 line. I left only the button.

The 4 line except buttons drive has useful buttons on the right: the return to a higher level, moving into a home / root directory, menu, the favorite directories, which is proposed to replenish itself to the user.

5 - tabs. It’s a very useful thing when working with files. However, with just one tab it is not rational to display it as on-screen space is wasted. Fortunately, Double Commander has the option of “Folder tabs - Show tab header also when there is only one tab”. Just uncheck this and tabs bar will appear only when creating the second tab (Ctrl + T). After closing the tab (Ctrl + W), the line will disappear automatically.

6 - current directory name. There you can see a full path. If you lose where you are, it is enough to look at this line and everything will be clear :)

7 - tabstop header. The standard behavior is to click for sorting, pull the edge to resize.

As a result, my Double Commander looks like this: 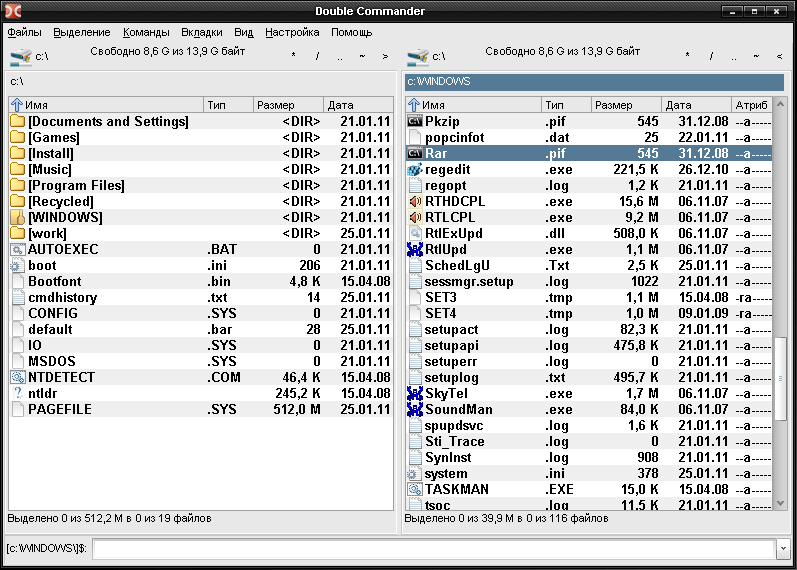 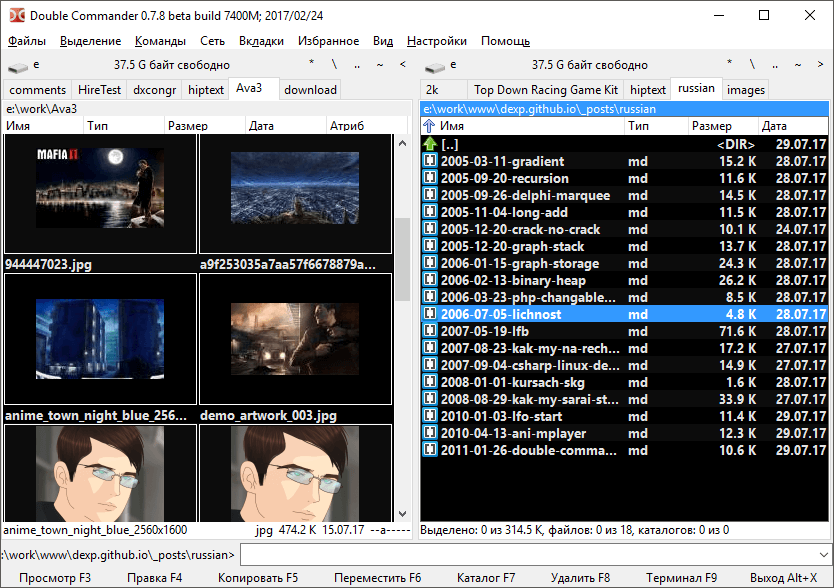 By the way, the preferences dialog is rather intuitive, friendly and pleasant. It was a pleasure to set up a program for myself. For example, to get a Double Commander as in the previous screenshot, I used the following layout configuration: 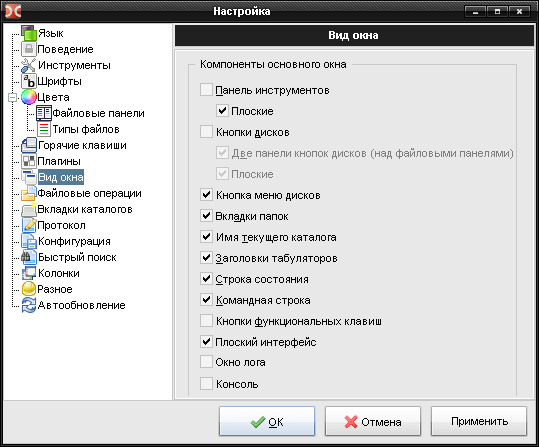 A little more cool features of Double Commander. One of the most pleasant surprises was “Behaviors - Lynx like movement”. This means that to go to the directory you can press Enter or the right arrow. To return to the directory above - the left arrow. At the result you can easily work using the keyboard arrows only.

“Quick Search - Letter only” turns on a quick search, similar to Total Commander. That is, you simply start typing the file name on the keyboard and the cursor automatically moves to the closest match.

Well, the most important super opportunity is the support for plugins from Total Commander. I was interested in Ext2+Reiser. You can find it on page http://www.ghisler.com/plugins.htm. Periodically you need to download a music form Linux-partition, watch some config files. To run a separate program for that is lazy and strange. This plugin also allows you to display ReiserFS/Ext2/Ext3/Ext4 partition almost like a local folder (read only). Also with version 1.4 supports UTF-8, which solved the problem with strange symbols instead of letters, if your system language is not English. The viewer also has no problems with viewing text files and allows you to change the encoding on the fly.

Installing the plugins into Double Commander is exactly 3 times harder than Total Commander :D This means that just to click 2 times on the archive is not enough - you need to unpack it anywhere. For simplicity, I extract it to a subfolder plugins of program. Then, go to the settings dialog “Configure - Plugins - File system plugins”. Next, click the “Add” button and select the unzipped WFX-file.

By the way for the functioning of the UTF-8 do not forget to create a file ex2fs.ini in a directory with a wfx-file. The content is:

Not without some drawbacks. Thus, the shortcomings of Double Commander: 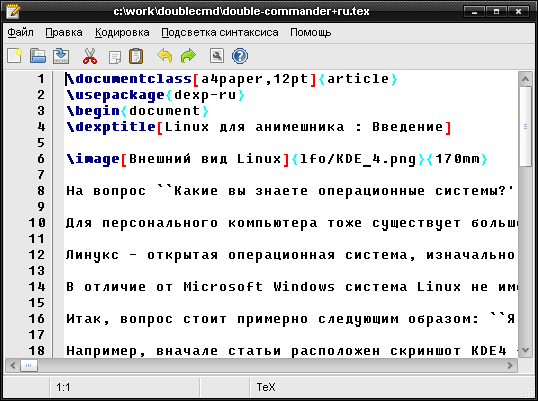 I do not like light color theme for my files. So I changed a colors a bit: 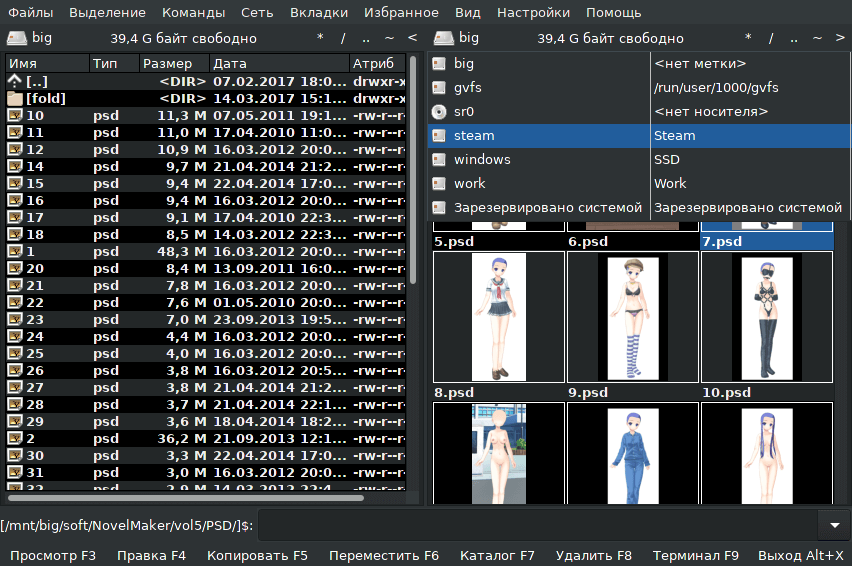 A great free alternative! Despite some minor shortcomings, you can forget about proprietary Total Commander and use the free Double Commander.

This publication in Russian ›