Somehow after sitting next day at the computer, I realized that I can not continue to work because eyes hurt. Usually, I have a few days of rest and I'm back in the ranks. But these few days have to live almost without a computer and do not stare at the mobile phone. 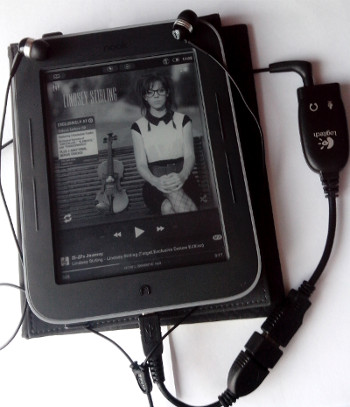 But I can not give up computer hardware in general, addiction requires a new dose! Devices with an E-ink screen can help - the eyes do not hurt. I’ve been using Nook Simple Touch for a year now. It is immediately installed Android 2.1 with a bunch of self-written programs from Barnes & Noble. It’s an old, but full-featured and full android after getting root. As an example, Nook will be used later, but by analogy, you can do similar actions on any other book with Android. So, what can you do efficiently on the reader, which applications were the most useful?

Here is a video on the capabilities of E-ink screen. I wanted the same myself immediately after watching.

Immediately appeared: Plants vs. Zombies, Angry Birds, Tekken 3 (via the Sony Playstation emulator). Everything worked, playable. It was very fun to show such possibilities of E-ink screen to friends. On this and it ended: in the fast-refresh mode on the screen were artifacts, the mode is really not convenient.

However, Opera Mini has remained on the Nook since then. 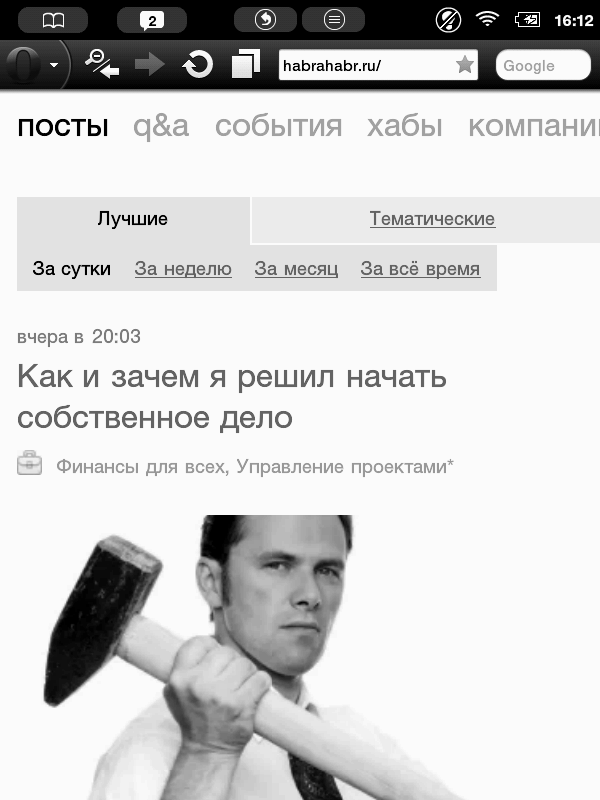 In fact, a smooth page scrolling is not so necessary. Even if you flip through the pages through the touchscreen, you can navigate through the physical passage of the finger across the screen, and not through graphical feedback. The matter of a habit. Of course, not too convenient, but the need to go to the Internet counts arises not often.

The Habrahabr has an article on setting up the Nook Touch. You can take a lot from there. Differences in the Cool reader: displayed in full screen, indented from the edges of the screen. 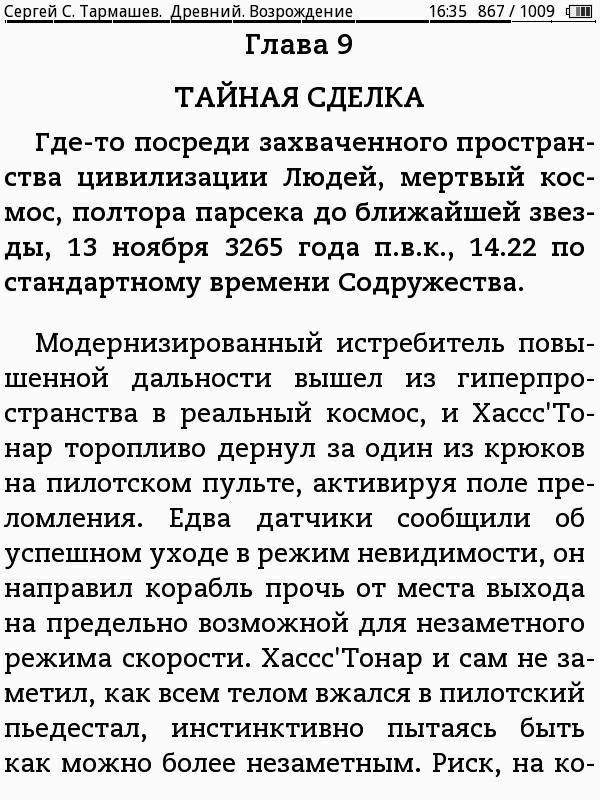 Cool reader displays a small bar of information about the book on the top by default. This is convenient for those who are annoyed in Nook’a lighted strip from the backlight from above.

Also, I want to pay attention to the possibility to install the cover of the book being read as a screensaver. I really missed it after switching from paper books to electronic. 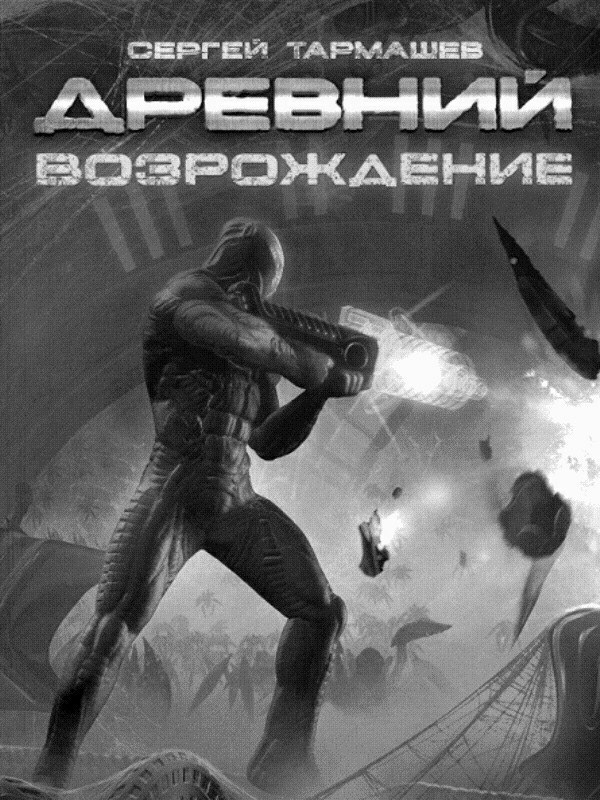 In my opinion, the article does not pay enough attention to the Relaunch launcher. It has most of the functionality that is really needed for the electronic book. For example, a task manager with the ability to kill processes that consume memory. 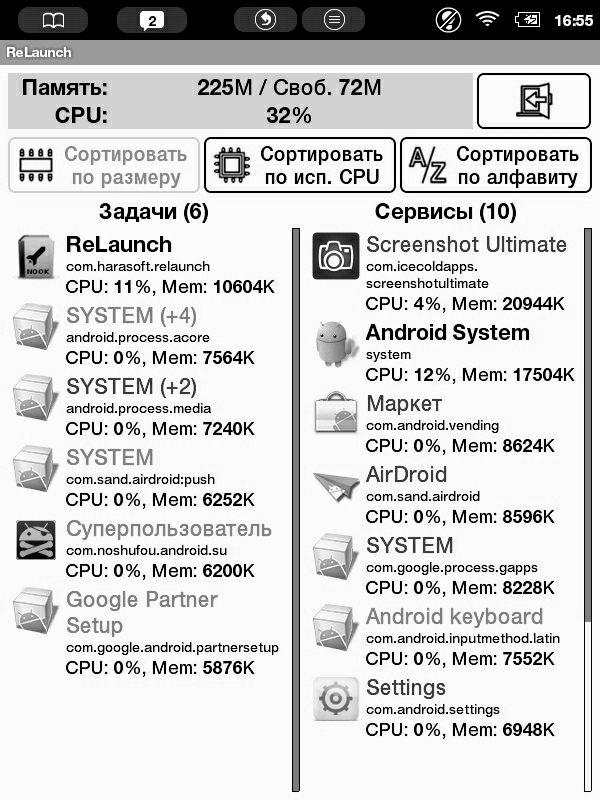 You can talk for a long time about Relaunch, but it’s better to just try it.

I chose the free Orion Viewer for reading PDF. I make fine adjustment of the cropping of the fields manually for each book. Orion Viewer understands the hard buttons of the Nook without any problems. 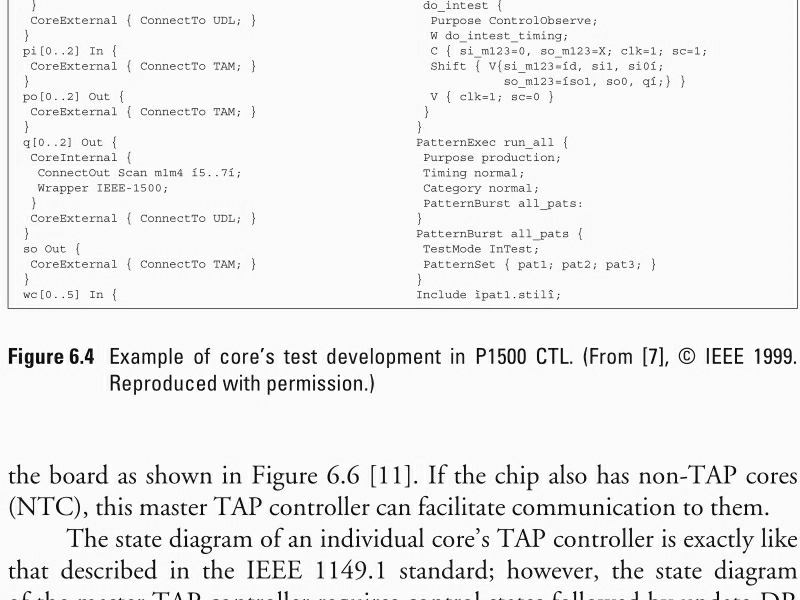 I can tell from my own experience that reading an e-book in PDF is sometimes even more convenient than after a bad printout.

ColorDict took root as a dictionary. It supports a large number of dictionaries, it is convenient with a touch interface, works great on Nook. 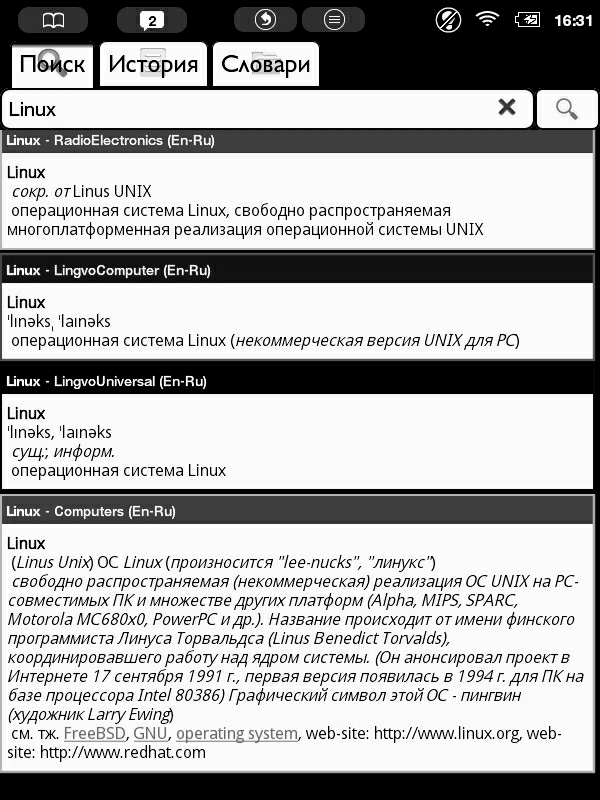 When I crawled on the Internet I came across a must-have application for Android: Perfect Viewer - viewing comics and manga. I did not read any comics or manga before buying Nook. 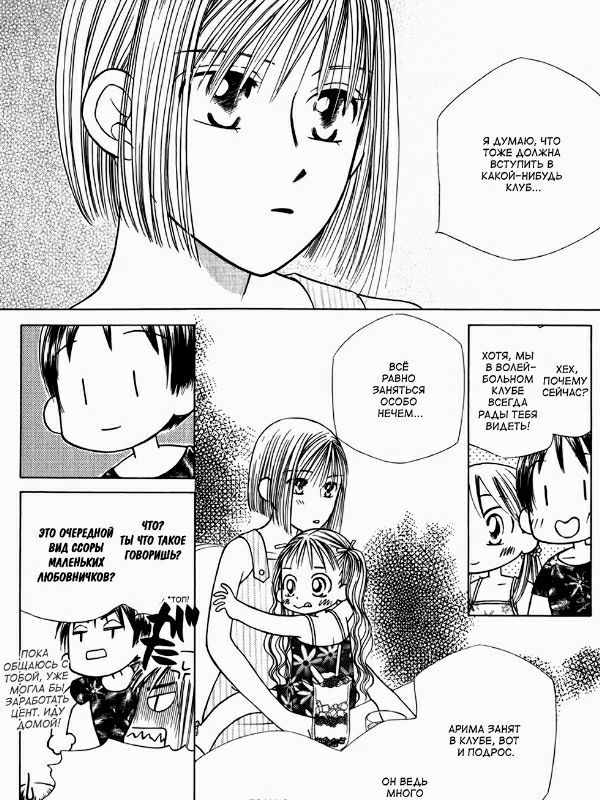 And with small text: 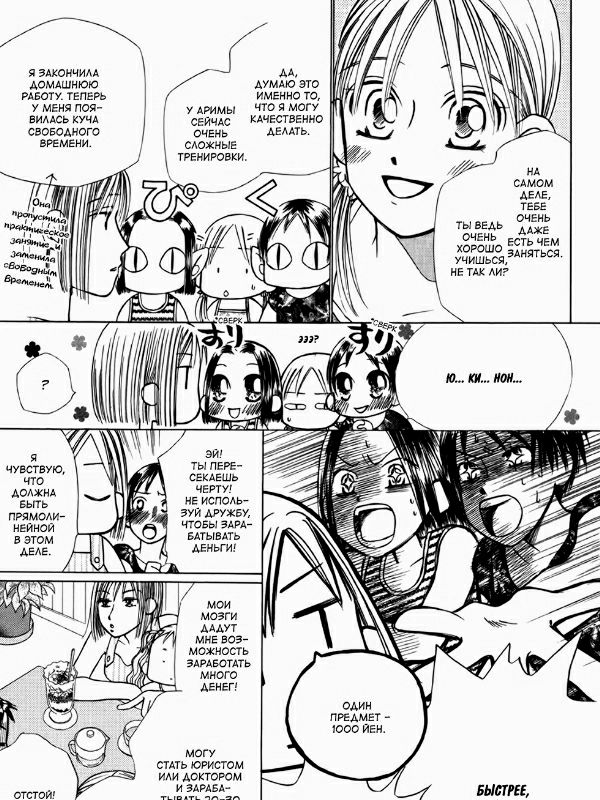 You can see in the screenshots: the service bars of Android are removed, the picture is stretched to the width and does not fit entirely on the screen, the manga is readable without any problems. The small text becomes completely unreadable if you fit the picture in height.

It was said that if you learn tap-zones Perfect Viewer, then you will use it as a true professional. This is really so, I saw the main menu only when the program was initially set up. Automatic switching to a new chapter, opening archives, selecting another manga - all this is in the tap-zones.

Now let’s turn to the topic of the first picture of the post - to the sound. Nook Touch does not support sound. At all. The sound hardware is totally absent, the whole program part is carefully discarded. But “absolutely by accident” there is a possibility to use USB via OTG. So it’s possible to use external USB sound card. Details in English with a bunch of links are discussed here.

Poweramp is traditionally considered the best as a music player. The latest version from Google Play works without problems on Android 2.1! Now you can listen to music, audiobooks, language courses on your device. 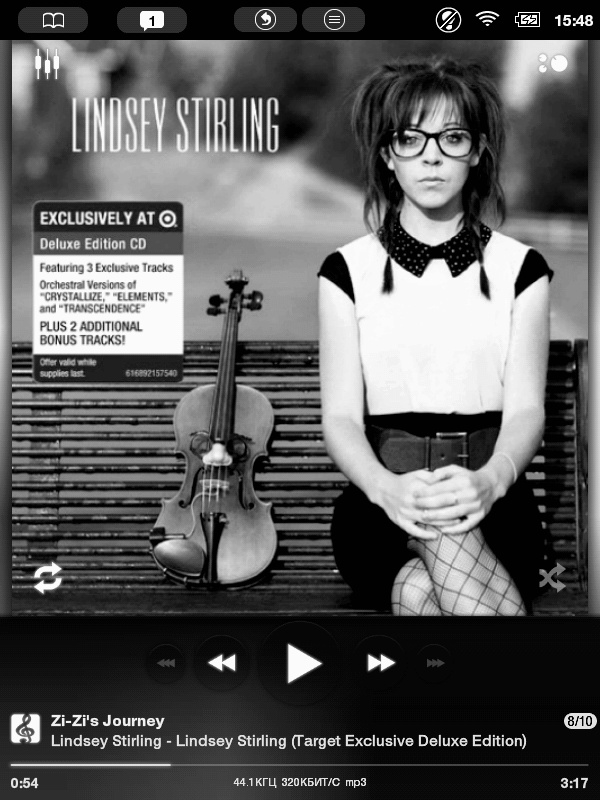 And I finally heard the promised in the reviews sound quality of Poweramp. The difference in sound with Deadbeef is negligible on the mobile phone. But on the Nook sound card makes noises and squeaks. Equalizer and tone options just saved me. I also picked up the bass a bit: 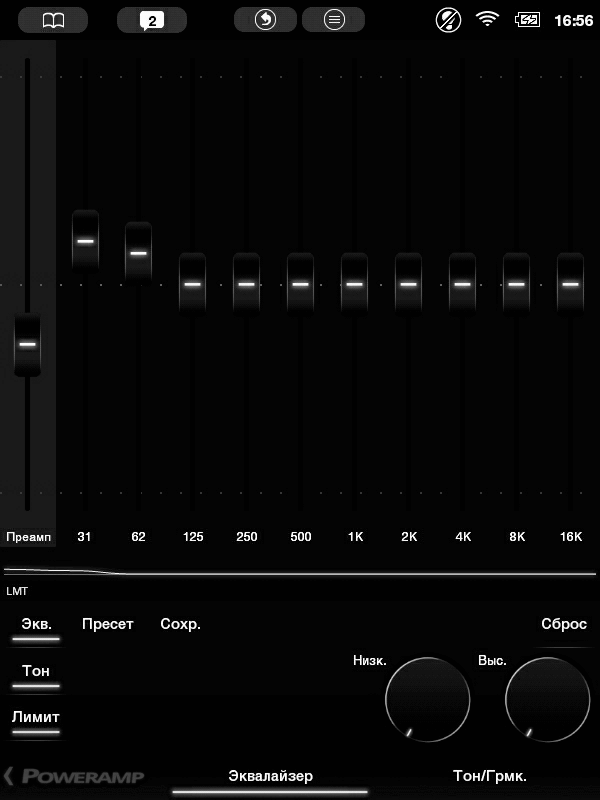 I use the preamp slider as a volume control because I could not get any of the volume adjusters to work.

There is a genre of games that still caught on - this is Visual Novell. A kind of mix: comic book, books, games. Usually, have a musical design. For example, there is an NDS-Novell interpreter for Nintendo: VNDS. 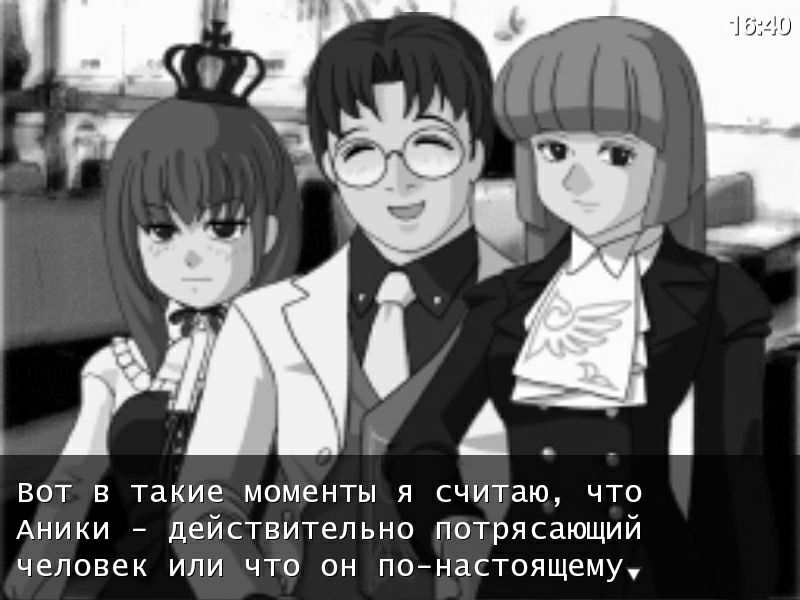 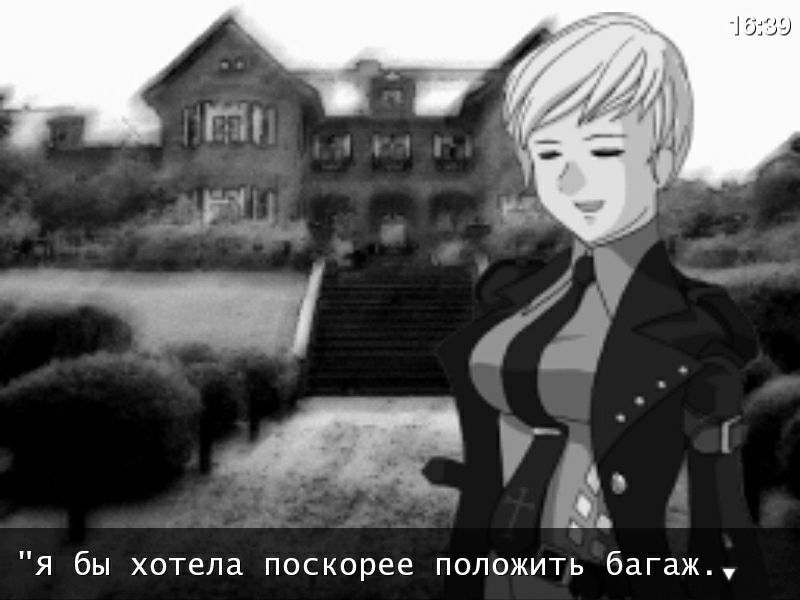 If there is no fear of English and there is no desire to download something big just for testing, then you can try something smaller. For example, Reaching Out. 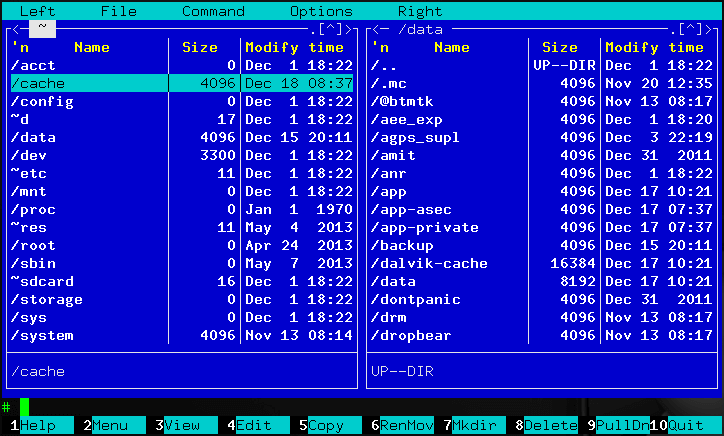 In conclusion, I would like to say that it is most convenient to read on Nook. But it is not necessary to read only books: the Internet, offline saved articles, comics, games. It should also be remembered that Android is a full-fledged operating system, and this gives many advantages and great opportunities for customization.

This article in Russian ›